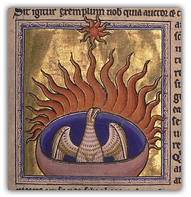 A phoenix is a mythical bird with a colorful plumage and a tail of gold and scarlet (or purple and blue, according to some sources). It has a 500 to 1,000 year life-cycle, near the end of which it builds itself a nest of myrrh twigs that then ignites; both nest and bird burn fiercely and are reduced to ashes, from which a new, young phoenix or phoenix egg arises, reborn anew to live again. The new phoenix is destined to live as long as its old self. In some stories, the new phoenix embalms the ashes of its old self in an egg made of myrrh and deposits it in the Egyptian city of Heliopolis (sun city in Greek). The bird was also said to regenerate when hurt or wounded by a foe, thus being immortal and invincible — it is also said that it can heal a person with a tear from its eyes and make them temporarily immune to death. The phoenix is a symbol of fire and divinity. Phoenix is the code name of for the new version of wxPython. I called this the Phoenix project because in the process of doing this project wxPython's implementation will be utterly destroyed and then reborn in a new and marvelous way, much like the mythical Phoenix rising from the ashes of its former self. For wxPython many things about how the wrapper/bindings code is produced will be changing, and we'll also be eliminating some other crud along the way. "Gentlemen, we can rebuild him. We have the technology... Better than he was before. Better, stronger, faster."

These pages describe some of the original ideas, plans and designs for ProjectPhoenix. Some of those ideas and plans are out of date now that the Phoenix is underway and development is progressing and plans are mutating a bit, but I think it is a good idea to remember where it all came from and why it exists, so these pages will remain here.

Want to assist the Phoenix developers? Have some free time or resources or perhaps just an insane desire to warp your brain a little? Here is information about some ways that you can help. Also be sure to check in on the wxPython-dev group to let us know you want to help or to ask questions.