This challenge has 2 parts:

This part introduces you to using demo code to learn about controls.

This part of the challenge introduces you to the directory tree surrounding the demo code.

Along the way, you'll get a glimpse of how user interfaces can be constructed and accessed from XML documents.

This is a little trickier than the previous part; Some obstacles you will face: 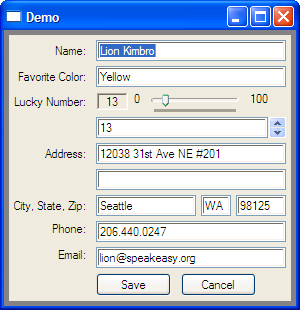 I have questions for people who attempt this challenge:

It took me about 30 minutes to do it all. There weren't in unreasonable problems, technically, but I did run into a cosmetic problem. I had to do further research to figure out how to get rid of the ugly dark gray background that wxFrame generates. I solved this by adding a wxPanel inside of the frame. It took me a while to figure out what to do to get rid of the dark gray background, though. I would suggest you put a reference to wxPanel but the example screenshot doesn't exactly use it either, so... -- Bryce

Interesting! Thank you SO MUCH for the feedback! Now, I'm not sure what they ugly gray backgound is; Are you talking about the dark gray border around the edge? I'll have to do this over, and see what's going on; I've forgotten too much. If you want to, just edit this page to include your wxPanel notes..! Just incorporate it right into the lesson. I'll check everything when I go through the lesson again.

If any of you out there are reading this, and have just completed this demo, try out what Bryce has said, and include notes on it in your response here..!

It took me probably 12 hours. Just to do part 1. What problems did I encounter along the way? Many

First off. I had to go and learn sizers first. Without that my spinner and slider were on top of each other. That took a bit of fiddling. Probably should have just gone ahead to learn XRC, which is what I was planning on doing after the tutorial anyway.

Next, I didn't like using EVT_MENU() stuff, so I learnt about Connect. Then I decided I didn't like the namespace pollution issues of from wxPython.wx import * and went to just import wx. Had to work around all the changes that induced. Had to work out what the new names for somethings were. Hint, wxEVT_SPINCTRL becomes wx.EVT_SPINCTRL, but wxEVT_COMMAND_MENU_SELECTED becomes wx.wxEVT_COMMAND_MENU_SELECTED That was a big one. That one sucked it hard.

Though it didn't suck NEARLY as hard as app = MyApp() vs app = MyApp(0) Why isn't my code working? well, who knows, the erorr message gets swallowed. Didn't look in the right FAQ to find that answer. Looked in the wx FAQ and the python FAQ, but not the wxpython FAQ.

While getting help on these issues, learnt about Bind(). Tried to get Bind to work. (Trying to eliminate lists of IDs) Hacked on that for ages. Finally decided that you can't do menuitems with Bind, they have to stay on connect, but you can do controls with bind.

Whatever. It's done now. I know a hell of a lot more about it than before, which I suppose was the goal.

It took me about 3/4 hour to do part 1. I also had to learn sizers in order to get the widgets to line up properly. There weren't any unreasonable problems, but I did get briefly mugged by the fact that changing the text in the spin control *doesn't* generate an EVT_SPINCTRL.

I tried using the panels but wasn't as satisfied with those results as with simply setting the size of the window to exactly fit the widgets. It would be nice to have some autosizing as in Tkinter.

First, let me say this tutorial is very helpful...challenges are a great idea! I am a total newbie, and I have learned a great deal. Now my dumb question.....

...Dumb questions...I am working thru this challenge and have been banging my head trying to get to get ticks to appear on the slider. In doing some research, I found some stuff that suggests ticks only work on a Windows machine (I had been working on linux (Ubuntu). Interestingly, when I ran the script on my Window PC, the ticks worked as advertised! I am I missing something here...it there a way to get a linux to be compatible here? For what it is worth, the windows slider look more "polished" with sharper graphics than on linux. Is that just the way it is?